WISCONSIN HIGH SPEED TRAIN WILL BE GOOD FOR BICYCLISTS 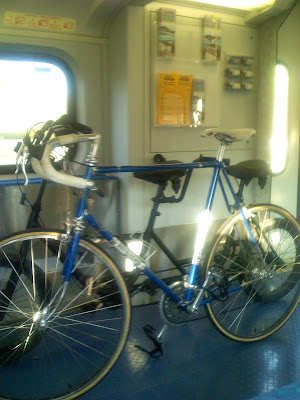 Wisconsin is getting two high speed trains that will be running by 2011. The two, 14, car trains will be used to run from Milwaukee to Chicago. If additional money is raised, there may be two more trains running from Milwaukee to Madison by 2013.
This should cut down on the number of people driving these routes. But more importantly, it opens doors for bike routes. With use of the train, bikers can bike from Milwaukee to Chicago and catch the train back or vice versa. There will probably also be a few stops which could lead to additional routes.
I would love to see a high speed train between Milwaukee and Madison. This would create some really fun weekends. Ride to a Brewer game and catch the train back, ride to the Zoo, ride to Summerfest...
A similar train runs along the coast in California and bikers often use it to bike from LA to San Diego. The train has a lot of stops and can also be used for some good one way run routes along the coast like Encinitas to La Jolla.