Why do Countries with Non-Existent Helmet Usage Have Lowest Rates of Bicycling Deaths?

Drivers of cars are less likely to hit walkers and bicyclists if more people walk and ride bikes.

1. When more people walk or bicycle,the less likely any of them are to be injured by motorists. 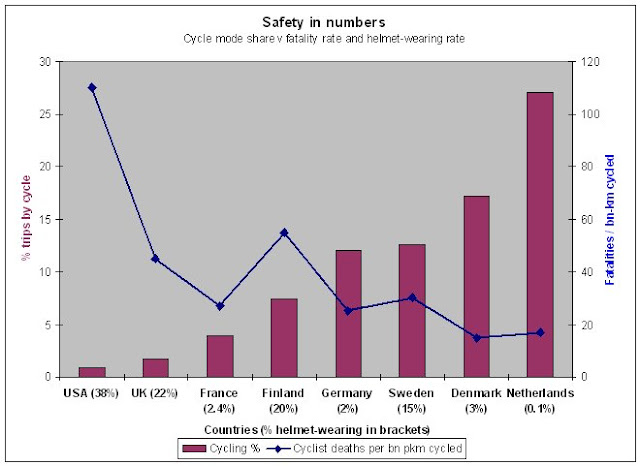 3. People who bike with a helmet may ride faster and drivers give less space when passing helmeted cyclists.


Drivers pass closer when overtaking cyclists wearing helmets than when overtaking bare-headed cyclists, increasing the risk of a collision, the research has found.
Dr Ian Walker, a traffic psychologist from the University of Bath, used a bicycle fitted with a computer and an ultrasonic distance sensor to record data from over 2,500 overtaking motorists in Salisbury and Bristol.
Dr Walker, who was struck by a bus and a truck in the course of the experiment, spent half the time wearing a cycle helmet and half the time bare-headed. He was wearing the helmet both times he was struck.
He found that drivers were as much as twice as likely to get particularly close to the bicycle when he was wearing the helmet.
Across the board, drivers passed an average of 8.5 cm (3 1/3 inches) closer with the helmet than without
The research has been accepted for publication in the journal Accident Analysis & Prevention.


4. Bicycle helmets may increase chance of neck injury in a crash because they may catch or drag on concrete surfaces causing the head to decelerate at a faster rate than the rest of the body.

I like your blog want to share something, people move via vehicles and one most used vehicle is bikes, they love high speed motorcycles but I want to say always use biker gears to make your safety while moving anywhere. Use leather jackets that make you safe as well as give you a style. You can check some bikers gear here https://bikersgearonline.com/product-category/mens-apparel/mens-denim-textile-vest/

Then, consider the visibility of motorcycle helmets. The brighter and whiter the helmet is, the more likely the driver of another vehicle or another motorcycle is likely to see you. Motorcycle safety

Riding on two wheels is one of the most exciting adventures of life to enjoy in. To do it properly you need to pay attention to safety and equipment. A best helmet can keep you safe from injuries.

If this new football wants to succeed and grow a loyal following fast, they should follow the blueprint that has worked well for �sports� like golf, auto racing, and boxing, all of which have enjoyed recent swells in popularity. Here is what they did: for vega helmets india visit Nayashopi

Thanks for such a nice content. Apppreciate it :)
Cheers
If anyone interested similar one's have a look here themotorbiker.com thanks