Are Roads Getting Less Safe for Bicyclists?

According to a recent report on U.S. Bicycling Facilities, although bicycles account for only about 1 percent of trips across all modes of transportation, on a per trip basis cyclists die on U.S. roads at a rate double that of vehicle occupants.

MADISON - Overall rates for U.S. biking deaths decreased 44 percent from 1975 to 2012, according to a new report published Aug. 14 by the Centers for Disease Control and Prevention and led by Jason Vargo, an assistant scientist with UW-Madison's Nelson Institute for Environmental Studies and Global Health Institute. 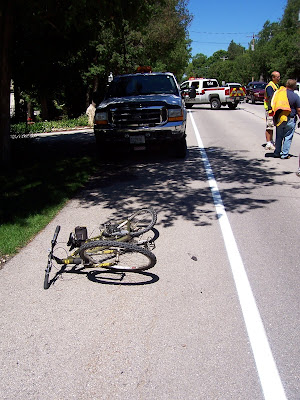 In contrast, death rates increased significantly among adult cyclists during the same period, particularly among men aged 35 to 54.

"We're not sure that the roads have become safer," Vargo said in a Bloomberg News story about the report. "We may be just putting people out on the same roads that are as dangerous as they were before."

Although bicycles account for only about 1 percent of trips across all modes of transportation, on a per trip basis cyclists die on U.S. roads at a rate double that of vehicle occupants, the report states.

Recent years have seen an increase in bicycling in the United States, especially among adults and in urban areas, the analysis shows. The share of total household trips taken by bicycle has doubled over the last 35 years and, from 2000 to 2012, the number of U.S. workers who biked to work increased 61 percent.

The report underscores the importance of improving bicycle safety in the United States with the aim of preventing fatalities, the authors state. They suggest that multifaceted, integrated approaches to address safety while also promoting cycling - including physically separated bike lanes, speed limits, speed bumps, helmet laws and education for motorists and cyclists - could prevent potential increases in biking mortality rates and help counter recent upsurges in adult cyclist deaths.

For example, several countries and some U.S. cities have higher bicycle use and lower mortality rates than the United States overall.

View the full report, along with a state-by-state breakdown of the statistics, at http://go.wisc.edu/bike-fatality-report.
Posted by Clay