According to a BBC News article:


Volvo has announced it is releasing a cyclist detection facility which should prevent fatal accidents.

The auto firm says vehicles fitted with the system will be able to detect threats including a cyclist suddenly swerving out into a car's path.

It said that if a collision risk was detected an alarm would sound and the car's brakes would be fully deployed.

Like the earlier release the innovation uses a radar in the car's grille and a camera located between its windscreen and back view mirror to detect collision threats.

I wonder how sensitive it is and if the car would brake for something like a squirrel or dog.  I wonder if there is any way to apply the radar to situations other than bicyclists darting out in front of the car-for example the driver is approaching a bicyclist from behind and swerves into the bicyclist. 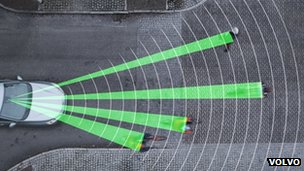