IS IT ETHICAL AND SAFE TO RUN LIGHTS ON A BIKE?

This recent New York Times article by Randy Cohen lays out specific reasons why Mr. Cohen feels it is ethical and safe to violate the law while riding his bicycle.  Mr. Cohen states that he routinely runs red lights, and treats red lights and stop signs as if they were yield signs. In the article, he states all cyclists could and should ride like him.

Mr. Cohen says that a fundamental concern of ethics is the effect of our actions upon others.

Several interesting and cogent points include:

1. Bicycles are a tiny threat to others-bicyclists in New York in the last quarter of 2011 killed no pedestrians and injured only 26 while cars and trucks killed 43 and injured 3,607.

2. Cars cause harm (although sometimes legally) including through air pollution, noise pollution, and obesity.

3. Bikes are not cars and should not be held to the same standards.  Because cars are heavier, drive faster, and are much more likley to injur others, people should consider this when they see a bicyclist rolling a stop sign.

4. Because a bicyclist is likely to get injured from riding dangerously, bicyclists have more personal stake in avoiding crashes.

As most people already know, there is an ongoing conflict between bicyclists and car drivers.  The one point missing from Mr. Cohens article is the consideration that his actions of running lights and violating the law may effect other bicyclists in the future.  Although Mr. Cohen may safely travel through red lights on his bicycle without hurting himself or affecting traffic, the more times he does so may generate even more vitriol towards other bicyclists.  Road rage incidents of drivers attacking or otherwise hurting bicyclists are not uncommon.  Furthermore, if one looks at any newspaper comment section after a bicyclist death, there will almost certainly be comments that suggest that although the bicyclist was killed by a driver (and may not have been at fault), the fact that other bicyclists often violate the law somehow has some relation upon the matter.

Obviously all bicyclists will never follow all laws just as all drivers will never follow all laws.  People like Mr. Cohen choose to take a pragmatic approach to riding and are more concerned with their own personal saftey than the small fine they may or may not receive for violating the law.  It makes sense that a person would be more concerned with his or her life than a small fine.

Personally, I feel that a lot of the conflict between motorists and bicyclists is due to the anger, stress, and frustration that a lot of people feel behind the wheel when stuck in traffic or listening to commericals on the radio in their cars.  Watching a bicyclist riding along (possibly at a speed faster than the car can travel) and rolling through a red light or stop sign may create a sense of jealousy.  If the driver is not affected by the bicyclist rolling the sign, there should be no reason for anger unless there is concern the bicyclist may injure a pedestrian, [which based upon Mr. Cohen's cited stats in New York seems rather unlikley].

Maybe the best solution is to have separate rules for bicyclists than motor vehicles as Mr. Cohen suggests.  If there were separate rules allowing bicyclists to roll stop signs, (like the Idaho stop law), then motorists may have one less reason to hate and complain about bicyclists.  This might lead to less road rage incidents.  What do you think? 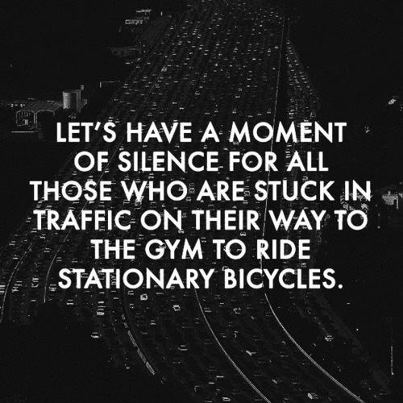