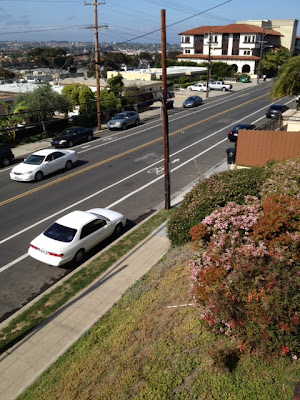 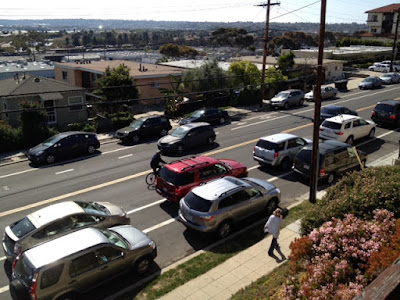 This recent piece in the Lehigh Morinng Call Newspaper contained a very interesting debate between two experts comparing bicycle lanes vs. sharrows/ shared use of roadways between bicycles and cars.

One expert generally held that bicycle lanes create false security and increase collisions especially at intersections.  He felt that although sharrows and sharing the lane may annoy and slow some drivers, sharrows give bicyclists a genuine sense of safety and the bicyclists know the city agrees with their style of riding.  (I think he is hinting there may be less arguments over right to use the roadway/ conflict between drivers and bicyclists).

The other expert generally held that bicycle lanes are better because they increase the amount of bicyclists and calm the streets, that intersections are not a major problem, and it's a matter of bicyclists and drivers being aware of each other.  He also felt that some bicyclists may not feel comfortable riding in the vehicle lane.

I like bicycle lanes because they tend to increase the amount of riders using the road.  Take for example Seminole Highway in Madison.  On a warm day, the bicycle lanes are filled with riders traveling in both directions.  Obviously part of this is due to the location of the roadway and its connection to desirable locations/ country riding.  Since the speed limit on Seminole in parts is close to 40 mph and the road gets quite busy, sharrows on this particular road may not work.

I realize that sharrows and bike boulevards in Madison also increase use of roads and appreciate those roads as well.  They tend to be more relaxing to ride on and have very little vehicle traffic which is great.

One of the main concerns in the above article is that bike lanes present a false sense of security.  That makes sense. I also agree that intersections would tend to be the most dangerous areas for cyclists using bicycle lanes.  With that in mind, a person could ride in the bicycle lane and cross into the lane of traffic (when it is clear) before coming to intersections.  This can be accomplished in a predictable manner.   I do this frequently descending on PD eastbound near BW3 and a few blocks West of Verona Road.  I cautiously move left so cars behind me see me after they crest the uphill, and also to avoid having to swerve out last minute due to a car pulling onto PD from my right.

In my opinion sharrows and dedicated lanes are both beneficial depending on the location, traffic patterns, road use, etc.  Someone pulling a child in a trailer would likely be more concerned with traffic speed, the amount of cars on the road, and the amount of space to safely ride, than they would be concerned with whether there are sharrows or dedicated bicycle lanes.
Posted by Clay