HOW HELMETS WORK IN A BIKE ACCIDENT 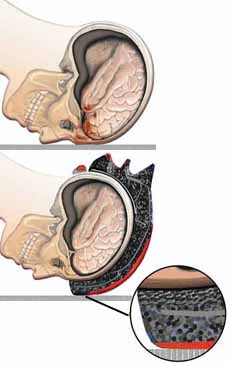 The following has been summarized from a popular mechanics article among other articles. The full popular mechanics article can be found here: http://www.popularmechanics.com/outdoors/adventures/1276786.html?page=1
Head injuries are the most severe of any injury during a bike crash and it's the sudden stopping of the head that results in severe injury. Helmets work by bringing the brain to a more gradual stop upon impact. When a rider without helmet crashes on a hard surface, inertia causes the brain to slam forward against the skull, which can cause bruising and internal bleeding.
Helmets designed to handle major crash energy generally contain a layer of crushable foam. When you crash and hit a hard surface, the foam part of a helmet crushes, controlling the crash energy and extending your head's stopping time by about six thousandths of a second (6 ms) to reduce the peak impact to the brain. Rotational forces and internal strains are likely to be reduced by the crushing.
Helmets soften the shock of a bicycle crash by gradually crushing to absorb impact energy. The outer shell cracks but remains intact. The helmet's body, compresses and absorbs energy to cushion the blow.
As early as the 1880's bicyclists began using helmets-at that time they were made of pith which disentigrated upon impact. The next helmet was the hairnet-a leather covering that proved to be ineffective in protecting the head. In the 1970's Bell began making hard plastic helmets that proved to be effective in protecting a bicylist's head during an accident.
An improperly fit helmet will not protect a rider so it is very important to make sure the helmet is placed on the head properly and properly secured.
Experiments have proved that wearing a bike helmet also protects during accidents involving crushing situations/being impacted by a vehicle.Helmeted skulls are able to resist compression at loads as high as 470 pounds. Un-helmeted heads/skulls fracture under these conditions.

The lesson? Wear a helmet always and make sure your friends do too!
Posted by Clay